In general, this disease is well controlled through the widespread use of seed treatments. Despite this, bunt outbreaks are reported most years, and are often in crops where seed treatments have not been used, were not used every year or where inadequate coverage of the seed occurred.

A bunt infection of wheat is usually first noticed at harvest because of the strong putrid fishy smell emitted from the grain. Closer examination of seed will reveal bunt balls, which are grains of wheat that have been replaced by a mass of stinking bunt spores. 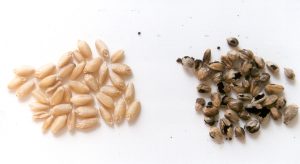 It is these bunt balls that break during harvest and seed movement that enable the disease to spread through a seed lot and infect the seed that will be sown next season.

Even though bunt infected plants may be shorter than healthy ones, it is difficult to identify a bunt infected crop before crop maturity. At maturity, bunted heads are darker in colour and have splayed glumes because of the large black bunt balls present within the glume.

Bunt balls that break during harvest contaminate seed and soil. When infested seeds are sown bunt spores germinate and the fungus infects the growing point of the wheat seedling. Following infection of the young seedling the fungus grows within the plant, generally without producing symptoms until the head develops. When new seed begins to develop in the head, the fungus replaces the tissues of the developing seed with its own spores.

Bunt can survive in soil for at least a year and for many years on seed. Bunt spores prefer moist and cool conditions (5-15°C) for germination. Therefore, early sowing into warmer soils can help reduce the level of crop infection. 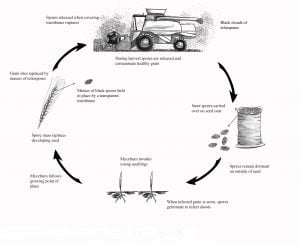 Grain Trade Australia’s commodity standards have a nil tolerance for bunt in all grades of wheat. See the table in the introduction.

Fungicidal seed treatments are extremely effective in controlling bunt. However, seed treatments need to be applied every year with good coverage of grain to prevent infection.

Following a bunt infection clean seed should be obtained. All machinery that handled infected grain should be thoroughly cleaned and wheat should not be sown back into an infected paddock for several years.