Loose smut of barley, like wheat, is caused by the fungus Ustilago tritici (U. nuda). However, the particular strain of loose smut that attacks wheat does not attack barley and vice-versa. In recent times loose smut has re-emerged as an issue in some Victorian barley crops. This issue has partly been attributed to increased susceptibility in some recent barley cultivars. Seed treatments provide effective control of this disease, but in the more susceptible cultivars the correct use of fungicidal seed treatments becomes even more important.

Symptoms of barley loose smut are similar to those of wheat loose smut. Until ear emergence affected plants often do not exhibit symptoms. Affected heads usually emerge before healthy ones and all the grain is replaced with a mass of dark brown spores.

The spores are initially loosely held by a thick membrane that soon breaks releasing the spores onto other heads. Finally, all that remains is bare stalks where the spores once were. 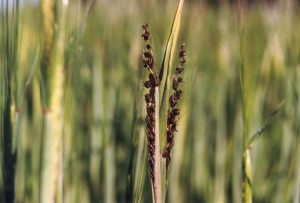 As loose smuts of wheat and barley have similar life cycles see the section on the life cycle of wheat loose smut.

The Grain Trade Australia commodity standards have a maximum tolerance of 0.1 gram of smut pieces per half litre in all grades of barley.

Using high rates of systemic seed treatments with good coverage every year will effectively control this disease. Following a loose smut outbreak in a crop new clean seed should be sourced.