Rhizoctonia root rot is a widely distributed fungal soil-borne disease found on a range of field crop and pastures. In severe cases it causes bare patches in paddocks, but yield loss still occurs even when patches aren’t present. Unfortunately, resistant cultivars are not available, so control is reliant on cultural practices such as targeted cultivation, control of the green bridge, good nutrition and more recently fungicidal control.

Bare patches may appear in the crop from an early growth stage and form areas of stunted plants. Bare patches may vary in size from a few centimetres to several metres in diameter.

Diseased roots show brown lesions on the outside of roots. If the roots are severely infected the root cortex will be affected with the root easily breaking, leaving the characteristic brown ‘spear tips’. 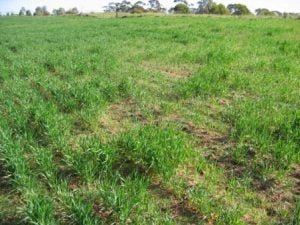 Bare patches in a cereal crop caused by Rhizoctonia. 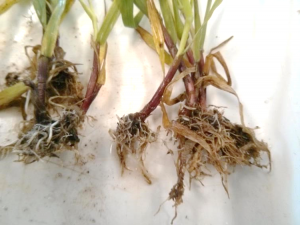 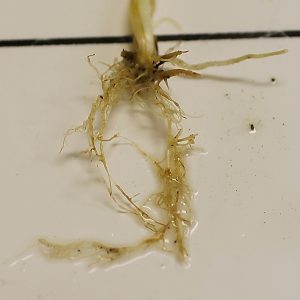 The Rhizoctonia fungus (Rhizoctonia solani) is a weak, unspecialised pathogen that can attack immature cereal roots, but not mature plant roots or stem tissue. Therefore, the primary or seminal roots are often attacked first, but later in the season immature secondary or nodal roots may also be attacked as they emerge.

Rhizoctonia solani (AG-8) survives between crops in particles of plant residue (organic matter) in the top 5-10 cm of soil. The fungus grows out of this material following autumn rains and spreads rapidly through the soil forming a hyphal (cobweb) net. The roots of germinating plants are infected when they grow into the hyphal net. The fungus is most active at temperatures between 10°C and 15°C. 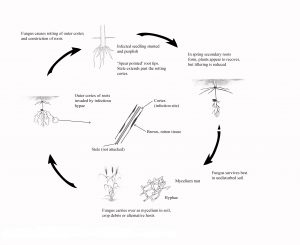 Stubble acts as a substrate for saprophytic growth of the fungus and provides a means for the fungus to survive over the summer. Cereal straw, a material with a high Carbon:Nitrogen ratio, favours the multiplication of Rhizoctonia solani (AG-8) in the soil. However, research has shown that the high stubble loads in conservation cropping systems also encourage the build-up in soil microbes that suppress the activity of Rhizoctonia. This suppressive activity has been shown to increase over a five to eight-year period. Rhizoctonia inoculum often increases during the first few years following the adoption of conservation cropping systems, but reduces once suppressive microbe populations increase. These microbial populations suppress the activity of Rhizoctonia and reduce the seasonal impacts of this disease.

Soil moisture plays an important role in Rhizoctonia survival. The fungus can grow below the permanent wilting point and survive dry summers. This gives it a competitive advantage and disease damage is often severe following dry summers. However, summer rainfall (more than 20 mm in a week) will reduce inoculum as the fungus does not compete well with other soil microorganisms in a warm and moist environment.

Rhizoctonia management is challenging due to its wide host range and lack of genetic resistance within crops. Strategies such as weed control, crop rotation, fungicides and sowing practice can all contribute to Rhizoctonia suppression.

Rhizoctonia multiplies on weed roots so it is imperative to control weeds. If weeds are established, a 3 to 4-week chemical fallow prior to sowing will reduce disease damage. In a season with a late break it is not advisable to delay sowing past the optimum sowing date.

Adequate plant nutrition can reduce the effects of Rhizoctonia, but should be used with other management practices. Applying additional nitrogen, phosphorus and zinc can reduce the yield losses due to Rhizoctonia.

Soil disturbance has, in many instances, proved effective in controlling Rhizoctonia. However, multiple cultivations before sowing are not necessary, provided weeds are controlled and there is a single deep cultivation (50 to 100 mm under the seedbed) in the fortnight prior to sowing.

The soil disturbance prior to sowing works by breaking up the web of Rhizoctonia fungus in the soil.

In a direct drilled operation, a depth modified seeder that disturbs the soil 50 to 100 mm under the seedbed while sowing at the correct depth, will provide enough soil disturbance to reduce disease damage. This can be done by using a long narrow point or by having cultivating tynes working directly in line with, but 50 to 100 mm deeper than sowing tynes. It may be necessary to use a deflector plate with the long narrow point to prevent the seed dropping to the furrow bottom.

Rhizoctonia has a wide host range and all crops, pasture and weed species grown in rotations are susceptible. There are no resistant cereal varieties and crop rotations are not effective in controlling this disease. However, rotations that include a canola or mustard crop will lower the level of Rhizoctonia inoculum in the soil, but they must be free of grasses.

Research has demonstrated that fungicides when used as part of an integrated approach to Rhizoctonia control can help reduce disease severity. In GRDC-funded trials in southern Australia and Western Australia, on average seed treatments gave 5 per cent (0 to 18 per cent) yield responses in wheat and barley. Other studies using fungicides registered for liquid banding at planting also showed improvements in Rhizoctonia control.