This disease is caused by the fungus Botrytis cinerea. Botrytis grey mould (BGM) is the second most important disease of chickpea and can infect plants at any stage of development. Under favourable conditions, the disease can develop rapidly, spread widely and cause complete yield loss. Chickpea genotypes with vigorous seedling growth, early canopy closure and early flowering are more likely to develop disease than other varieties. Use of badly infected seed can result in total crop failure where seed is not dressed with a fungicide. Crop losses are greatest in seasons with a wet spring, particularly when crops develop very dense canopies.

Plants may be attacked at any growth stage. Grey mould is most likely to first appear as a soft rot at the base of the stem in the collar region. The affected tissues become covered with a fluffy grey mould initially.
As the disease progresses affected plants wither and die. Small black sclerotia may form on the surface of affected tissue when the plant dies. Occasionally in older plants, only a few branches on a plant are affected and the rest of the plant appears quite normal. Seedling infection can cause seedling blight and reduce plant establishment. 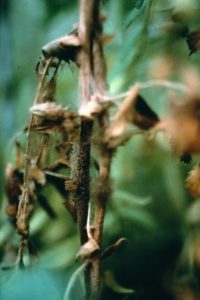 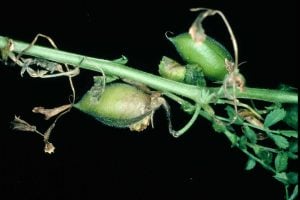 The fungus survives on infected seed, as a saprophyte on decaying plant debris and as soil-borne sclerotia. The disease is often established in new areas by sowing infected seeds. 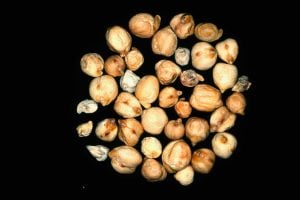 Masses of spores are produced on infected plants. These fungal spores can be carried from plant to plant by air currents and spread the disease rapidly. Once a crop has become established, the warm, humid conditions under the crop canopy provide ideal conditions for infection and spread of the disease. 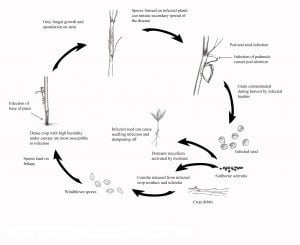 Seedling blight can be prevented by using disease-free seed and applying fungicide seed dressing. Later canopy infection can be avoided by cultural management practices such as lower seeding rates and wider row spacings which result in crops that are more open and dry out quicker following wet conditions. There are several fungicides registered for in crop use which can be used to manage this disease. Check the Australian Pesticides and Veterinary Medicines Authority for the latest registrations and permits.