Take-all is an important soil borne disease of cereals, that is worse following seasons with a wet spring. Take-all can be controlled with a one-year grass free break from cereals and there are chemical control options available at planting. 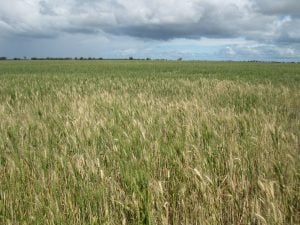 Patches of deadheads caused by take-all.

Inspection of stem bases will often show a distinct blackening. The white heads form as the take-all fungus blocks the water conducting tissue in the plant restricting water uptake. Low soil moisture during October and November increases the occurrence of white heads.

Inspection of plant root shows the unique symptom of take-all, blackening of the roots. The take-all fungus gets into the centre of the root (stele) so that when roots are snapped and observed end on, the root is black to the core. 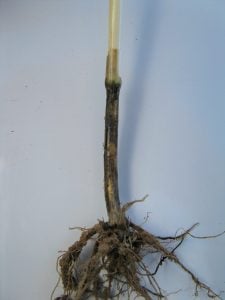 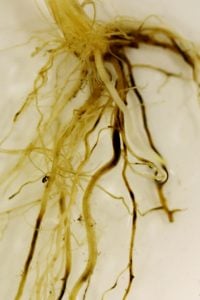 Take-all infection of wheat seedling. The blackening of the roots, with the black fungal growth present in the centre of roots a useful diagnostic feature.

Take-all (Gaeumannomyces graminis var. tritici) can only survive between susceptible cereals in the root and tiller bases of previously infected plants. Following autumn rains, the take-all fungus grows out of this material and attacks the roots of susceptible plants. In the absence of hosts, the fungus is unlikely to survive more than one year. The build-up of take-all is greater during wet springs, but its carry over is reduced following significant summer rain events (i.e. >25 mm in a single event). 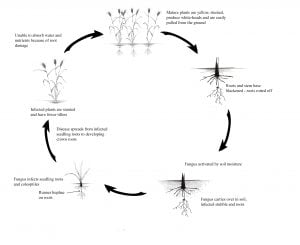 Disease cycle of take-all in cereals. Illustration by Kylie Fowler

A PREDICTA® B test prior to planting can identify paddocks at risk of damage from take-all. Should a paddock be identified with a take-all risk then appropriate management can be implemented.

Plan ahead and have a grass free break in the year before cropping. Start fallow or remove grass weeds from break crops before the end of July (end of June in the Mallee) to prevent the fungus multiplying and being carried into the next crop. This will also give plenty of time for plant debris, in which the fungus survives, to break down.

Ensure crop rotations are in place, with pulses, oilseeds or oats (if oat strain is not present) a good break to ensure the reduction of take all inoculum. A single year break will usually be adequate, however, where this break is a drought year a further break may be required.

Take-all affects cereals and grasses so non-cereal crops (e.g. pulses and oilseeds) will provide a break. Where the oat strain is present, oats should also be avoided as they will be affected by Take-all.