Note: This disease is present in Western Australia and South Australia, but not Victoria.

Anthracnose, caused by the fungus Colletotrichum lupini, is a highly destructive disease of lupins. The disease can cause complete crop losses in susceptible varieties. Anthracnose was first detected in Western Australia and South Australia in lupin crops in 1996 but the disease has not been detected in Victoria to date. In 2016, Anthracnose was detected in a small number commercial lupin crops in southern NSW. Restrictions remain in place on the infected properties and surrounding properties. Widespread surveys of lupin crops across NSW in 2017 did not detect any further spread of the disease.

Lupin growers and commercial agronomists are urged to monitor lupin crops for this disease in Victoria and New South Wales.

Symptoms of the disease include a distinct bending and twisting of stems into a shepherds crook. The bending of stems is due to the formation of lesions within the crook of the bend causing collapse down one side. Within the lesion are bright pink/orange spore masses that spread the disease within the crop. Lesions can also later form on developing pods. Symptoms become most obvious when crops enter the reproductive phase and start flowering and podding. The disease attacks the soft plant tissue at the growing points (including stem tips, flowering spikes and pods) and works downwards into the crop canopy. Anthracnose will develop in patches or ‘hotspots’ within the crop. As the disease is spread through rain-splash of spores, patches of deformed plants will form within the crop as the disease spreads following rainfall events. 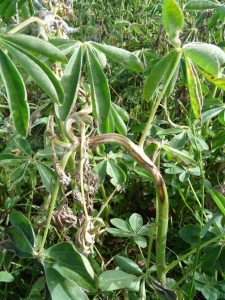 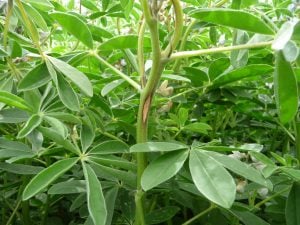 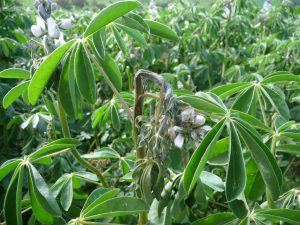 Typical shepherds crook symptom due to anthracnose. The formation of lesions on one side of the stem leads to collapse of the stem. (Photo – Kurt Lindbeck NSW DPI). 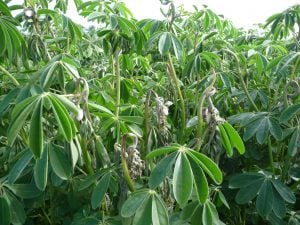 Pods develop lesions similar to stems and are often twisted and distorted. Pod infections can result in complete loss of pods or production of infected seed. Infected seeds can be malformed, have brown lesions, fungal mycelium on the seed surface, or have an occasional pink spore mass

The disease is specific to lupin species only and does not affect any other pulse species including field pea, faba bean, chickpea or lentil.

The disease survives on old lupin trash, as well as in or on infected seed. The pathogen will not survive in the soil in the absence of stubble residue.

The fungus can survive for up to two years on infected seed. Infected seed that is sown will produce infected seedlings which will quickly produce lesions on the root, hypocotyl, cotyledons, leaf petioles or stems. These lesions produce an abundance of spores that can be splashed onto surrounding healthy plants by rain and establish the disease in new and surrounding crops.

The fungus can survive over summer on infected stubble but is not regarding as a significant source of inoculum compared to infected seed. Rain stimulates the pathogen and spores produced on the old stubble can infect new crops through rain-splash and direct contact with new season or self-sown lupins. 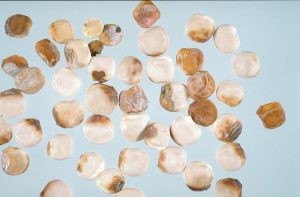 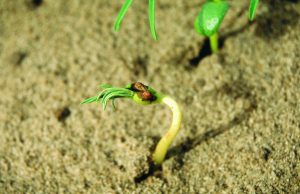 Do not move vehicles or equipment from an infected paddock to uninfected areas without thoroughly washing them down. If you walk through an anthracnose infected lupin crop, wash all clothing and sterilize hands and boots by spraying with commercial bleach (2 per cent). Early detection can assist in containment of the disease if found. Growers should closely monitor all of their lupin crops for symptoms of anthracnose.

Infected seed is the primary means of survival and transfer of the disease. Sowing clean seed is the best management tool for avoiding crop infection. Avoid sowing seed from South Australia and Western Australia where anthracnose is known to occur. A commercial seed test is available from AGWEST plant laboratories, Western Australia (Ph. 08 9368 3721).

Growers are advised to select varieties with moderate resistance. Narrow-leaf varieties Wonga, PBA Jurien and PBA Barlock are resistant (R) whilst PBA GunyidiA (MRR) and MandelupA (MR) are slightly more susceptible. All other narrow-leaf and albus lupin varieties are susceptible to anthracnose. Avoid planting ornamental or Russell lupins which have been found to carry anthracnose in Australia in the past. These lupins should not be grown in gardens on properties where lupins are grown. Varieties of narrow leaf lupins differ in their susceptibility to anthracnose.

Disease transmission from infected seed can be reduced with the use of a fungicide seed dressing containing thiram.