Sclerotinia rot, caused by Sclerotinia sclerotiorum and S. trifoliorum, is an occasional disease of chickpea but has caused significant crop losses in eastern Australia. Sclerotinia rot can cause serious crop losses where a substantial number of plants within a crop are affected. Kabuli chickpeas appear more susceptible to this disease than desi chickpeas but both types can be seriously damaged under favourable conditions. Dense crops are likely to be the most severely affected, particularly under moist conditions. Grain quality can be decreased when infected with

A small number of dead plants scattered throughout a paddock. Affected plants first wilt and rapidly die, often without turning yellow. Later, as the plant dries out the leaves turn a straw colour.

On the surface of the root, just below ground level, small black fungal bodies called sclerotia (which are irregular in size and shape), can sometimes be seen mingled with white cottony fungal mycelium.

In spring, water-soaked spots may appear on the stems and leaves. Affected tissues develop a slimy soft rot from which droplets of a brown liquid may exude. Infected tissues then dry out and may become covered with a web of white mycelium of the fungus. 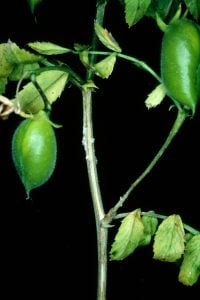 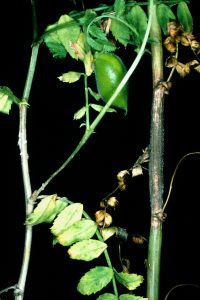 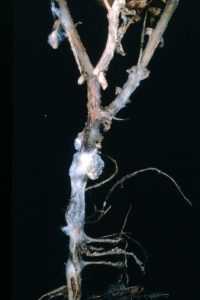 The disease is usually established from sclerotia (survival bodies of the fungus) present in the soil or introduced with contaminated seed. Outbreaks are more common when very wet conditions occur in late June and early July.

The sclerotia germinate in moist soil and either directly infect roots or produce air-borne spores which attack the above ground parts of the plant. Once established, the fungus rapidly moves to adjacent healthy tissue. Within a few days of infection, plants start to wither then die.

Sclerotia formed on infected plants enable the fungus to survive to the following year. Individual seeds can be contaminated with the fungus and/or sclerotia may be present in the seed sample. Sclerotia can remain viable in the soil for up to eight years.

Soil-borne sclerotia are the most important disease source for establishing disease in following crops. Seeds infected with sclerotinia can be the cause of disease establishment in otherwise sclerotinia-free areas. 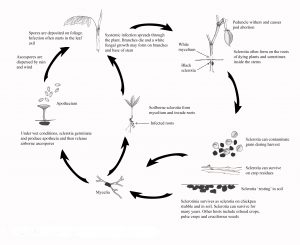 Disease cycle of sclerotinia of chickpea. Illustration by Kylie Fowler.

Use of disease-free seed minimises the risk of disease and prevents it being established in a new area. It is important to avoid sowing chickpeas in areas where the disease is known to be present.

Crop rotation is the best method of control once the disease has become established. Cereal crops are not affected by sclerotinia and provide a good disease break. Pulse crops, oilseeds (canola), legume-based pastures and capeweed are all good hosts for the pathogen.

If a sclerotinia rot problem does occur, a four-year break from disease hosts is required to substantially reduce the number of sclerotia in the soil. The most practical option is to use cereals and other legumes which are more resistant to sclerotinia than chickpea.

The seed harvested from infected crops should not be used for sowing. No commercial seed treatments or fungicides are known to control this disease in crop.

Sow within the recommended sowing window for your district. Early sown chickpea crops are more prone to developing sclerotinia rot.

Effects of Sclerotinia on Crops