Stem rust is an occasional, but devastating disease of wheat.

Conditions that favour stem rust epidemics are rare and occur on average once every 16 years in Victoria. However, when conditions are conducive, the disease can cause complete crop loss in susceptible varieties.

Historically, the most severe epidemics in Victoria occurred (in descending order of severity) in 1973, 1947, 1934 and 1955. In 1973, stem rust reduced the Victorian wheat harvest by 25 per cent. It is unlikely that stem rust losses will ever be as severe as in 1973 due to the increased cultivation of stem rust resistant varieties and the greater availability of effective foliar fungicides. In recent years, there have been few localised occurrences of stem rust.

Following the exceptionally wet January of 2011 there was a large amount of inoculum carry over that resulted in widespread stem rust in Victoria during that year. In spite of this, the widespread preventative use of fungicides helped minimise losses from this disease. 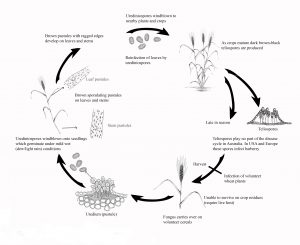 Rust spores are wind-blown and can be spread over large areas in a short time. Wet conditions and temperatures of approximately 15-30°C favour the establishment of stem rust within crops. Stem rust usually becomes evident later in the season than stripe rust as it prefers warmer temperatures.

Stem rust is characterised by reddish-brown, powdery, oblong pustules. The pustules have a characteristic torn margin that can occur on both sides of the leaves, on the stems and the glumes. Stem rust spores are much darker in colour than leaf or stripe rust spores. 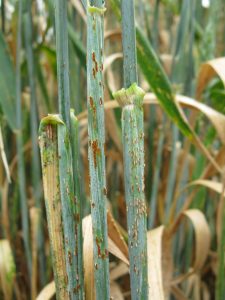 As the plant matures, the pustules produce black spores known as teliospores. They occur mainly on the leaf sheaths and stem.

Stem rust can occur in all regions of Victoria where susceptible varieties are grown. However, the likelihood of a stem rust epidemic is increased by several factors:

If the first two conditions above are met and there is a wet spring, an outbreak is likely to occur.

Stem rust can be managed using an integrated approach. This includes reducing the inoculum in a district by managing the green bridge, avoiding susceptible cultivars and close monitoring to enable timely fungicide sprays.

Rust can only survive from one season to the next on living plant material (mainly self-sown cereals). Therefore, the removal of the green bridge is essential to reduce the amount of inoculum present to infect a new crop. This is why stem rust epidemics have been worse following wet summer/autumns that favour volunteer cereal growth.

Stem rust occasionally produces new pathotypes (races) which are capable of attacking resistant varieties. These new pathotypes occur when a chance mutation occurs in this asexually reproducing fungus. Use of resistant varieties minimises the amount of rust in a district, thus reducing the chance of new pathotypes occurring. It is important that growers are aware of a variety’s resistance reaction to stem rust. For a comprehensive list of varieties, consult a current Victorian Cereal Diseases Guide (AG1160).

In Crop Management of Stem Rust

Stem rust is most severe in susceptible varieties when it begins to develop in the crop before flowering with crop losses of 50 per cent possible. Yield losses from later infections are possible, but not as severe.

As stem rust requires warmer conditions than stripe rust for development, it is advisable to begin monitoring for stem rust from flag leaf emergence onwards. Monitoring will be necessary in seasons when stem rust has been detected locally or on volunteer plants before sowing.

Inspect wheat crops every 7 to 10 days from flag leaf emergence to early dough grain development. However, if stem rust is detected within a region, then increase inspection frequency to every 4 to 7 days.

If stem rust is detected, walk through the paddock in a ‘W’ pattern and collect 10 stems from 10 random locations (total 100) to determine the percentage of stem rust infection.

The information in the table below is a guide for the application of foliar fungicides.

A guide for timing fungicide control of stem rust

Note: this table is not based on Victorian data, but on limited experimental data from Western Australia (Jayasena et al 2015). Fungicides will give better control of stem rust when applied early in the epidemic. A late, low level occurrence of stem rust (i.e. after mid-dough) will have little impact on yield.

In 2011, when there were paddocks of self-sown wheat heavily infected with stem rust at sowing, the prophylactic application of fungicides to susceptible varieties was important for the area-wide control of this disease. Such an approach would not be warranted in most seasons.

In Victoria, there are a number of active ingredients (available in a range of products) registered for the control of stem rust.

It is always important to read the chemical label before use. In particular, check that the product is registered and use the maximum recommended label rate for stem rust control in wheat.

Note: products containing tebuconazole break down relatively slowly in plants and users must observe the product label restrictions regarding the total amount that can be applied to one crop per season. This will ensure harvested crops don’t exceed the tebuconazole maximum residue limit (MRL) in cereal grains. See Taking Care with Foliar Fungicides for more information. As sprays for stem rust may be applied late in the season, it is extremely important to know the harvest withholding period for the chemicals, which can vary from 4 to 6 weeks.