Infection with TuYV is common and all canola varieties and hybrids are susceptible. TuMV and CaMV tend to occur at low incidences mostly in south western Victoria, especially in dual-purpose spring-sown canola. TuYV has been shown to reduce canola yield by up to 46 per cent and reduced oil quality.

These viruses are not seed-borne and are transmitted by the green peach aphid (Myzus persicae), cabbage aphid (Brevicoryne brassicae) and turnip aphid (Brevicoryne pseudobrassicae). They survive in weeds or volunteer canola host plants outside the growing season and are then spread from these infected plants into crops by aphids which act as vectors for virus transmission. TuYV is transmitted persistently while CaMV and TuMV are non-persistent viruses.

This is the most important virus of oilseed rape and canola crops in Australia. TuYV is wide spread throughout Australia and in 2014 emerged as an epidemic of canola crops in South Australia, destroying thousands of hectares. The incidence of this virus is high in Victoria. This virus is transmitted by several aphid species but the green peach aphid is the most efficient vector. To date, no resistant varieties are available.

Infected canola crops show a variety of symptoms but also can be symptomless. Symptoms include reddening of leaf margins and interveinal chlorosis. Infected plants may be dwarfed, leaves may be thicker, leathery, yellow and brittle. Early infected plants may die as a result of TuYV infection. 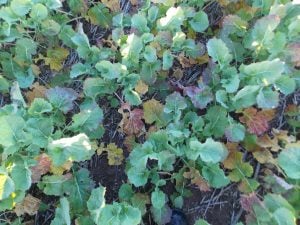 The virus and aphid vectors persists over summer in fodder turnips and in weed species, then aphids transfer virus into canola crops in the winter. TuYV is not seed-borne. Annual sampling of green peach aphid populations have shown that up to 72 per cent of winged aphids carry TuYV. The virus is phloem limited; aphids need to ingest infected sap to acquire the virus.

This virus belongs to the potyvirus group and was first reported in the USA. It is distributed worldwide and transmitted non-persistently by aphids, but is not seedborne. It has been found in south western Victoria. The incidence and severity of TuMV in canola crops is not as great as TuYV. 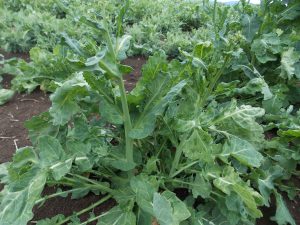 The virus is transmitted non-persistently by aphids and through sap inoculations. It is not seed-borne.

The virus over-summers in weed species or in rape mustard sown for fodder in summer. In winter canola crops it is found in low incidence.

This is a DNA virus with a restricted host range but is distributed worldwide in temperate regions. It is transmitted by many aphid species in a non-persistent manner. This virus is found south west of Victoria in low incidence.

What To Look For

Symptoms of CaMV include vein clearing, leaf distortion and bunchy appearance of the infected plant. 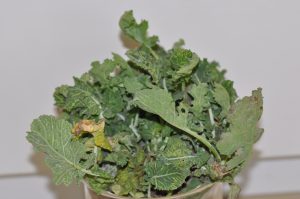 Symptoms of CaMV in canola.

The virus is transmitted mechanically and by aphids. It is not transmitted through seeds.

To date, virus resistant varieties of canola are not available so integrated management practices are advised. These include weed control, removal of green bridge during summer, sowing into standing stubbles, the use of neonicotinoid insecticide seed dressings and in-crop aphid control based on monitoring.