Powdery mildew is caused by the fungus Blumeria graminis f. sp hordei and is most common in early sown crops with good canopy cover and good nitrogen nutrition. Symptoms are usually first observed during tillering, but the disease does not normally persist beyond ear emergence. Losses are typically minimal in Victoria but can be as much as 25 per cent in heavily-infected crops, which has been observed in South and Western Australia.

At first, small, yellow spots appear on the leaves. Several days later a white fluffy fungus can be seen in these spots. The fungus can infect all above-ground parts of the plant including the head. It causes yellowing and early death of leaves. Later in the season the fungus produces small black specks. These are commonly found in old infections near the base of the plant. 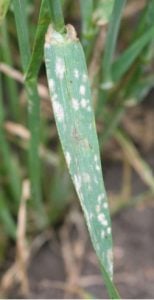 Powdery mildew is an obligate parasite that lives on living barley plants. Infection produces masses of tiny, white spores which are spread when blown by the wind. Infection occurs when there is high humidity from dew and temperatures between 15-25°C and is suppressed by rain resulting in powdery mildew being more severe during drier conditions. Mildew symptoms usually appear five to seven days after infection. The fungus can multiply quickly, and crops can become heavily diseased within four to five weeks of the first signs of the disease. The disease carries over from one season to the next on volunteers and grasses. Mildews are host specific and, therefore, mildew from barley will not infect wheat. 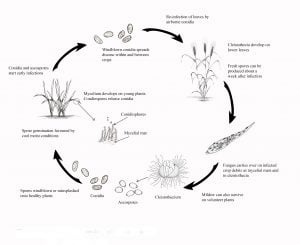 Remove volunteer barley plants by grazing and/or herbicides to reduce inoculum loads. Crop rotations are not an effective control of powdery mildew as spores can be readily blown onto a healthy crop from diseased crops in the district.

Barley varieties vary in their susceptibility to powdery mildew so consult a current Victorian Cereal Disease Guide to determine risk.