Oats are affected by both loose (Ustilago avenae) and covered (Ustilago segetum var. hordei) smut. The field symptoms of these two diseases are often indistinguishable. The regular use of seed treatments effectively controls these diseases.

Smut infections of oats are usually not apparent until head emergence. At emergence, infected heads contain masses of dark brown to black spores that have replaced each grain. These spore masses are held in place by a thin membrane that often breaks allowing the spores to spread to healthy seeds. 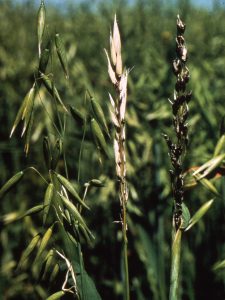 Smut spores survive from one season to the next in contaminated seed lots. At sowing the smut fungus infects the emerging seedling. Infection is favoured by early sowing into warm seed beds. Following infection, the fungus grows systemically within the plant without producing symptoms. At flowering the fungus grows into the floret and replaces the developing grain with spores.

Using systemic seed treatments every year will effectively control this disease. Following a smut outbreak in a crop new clean seed should be sourced.

Was this article helpful to you? Yes 2 No 1